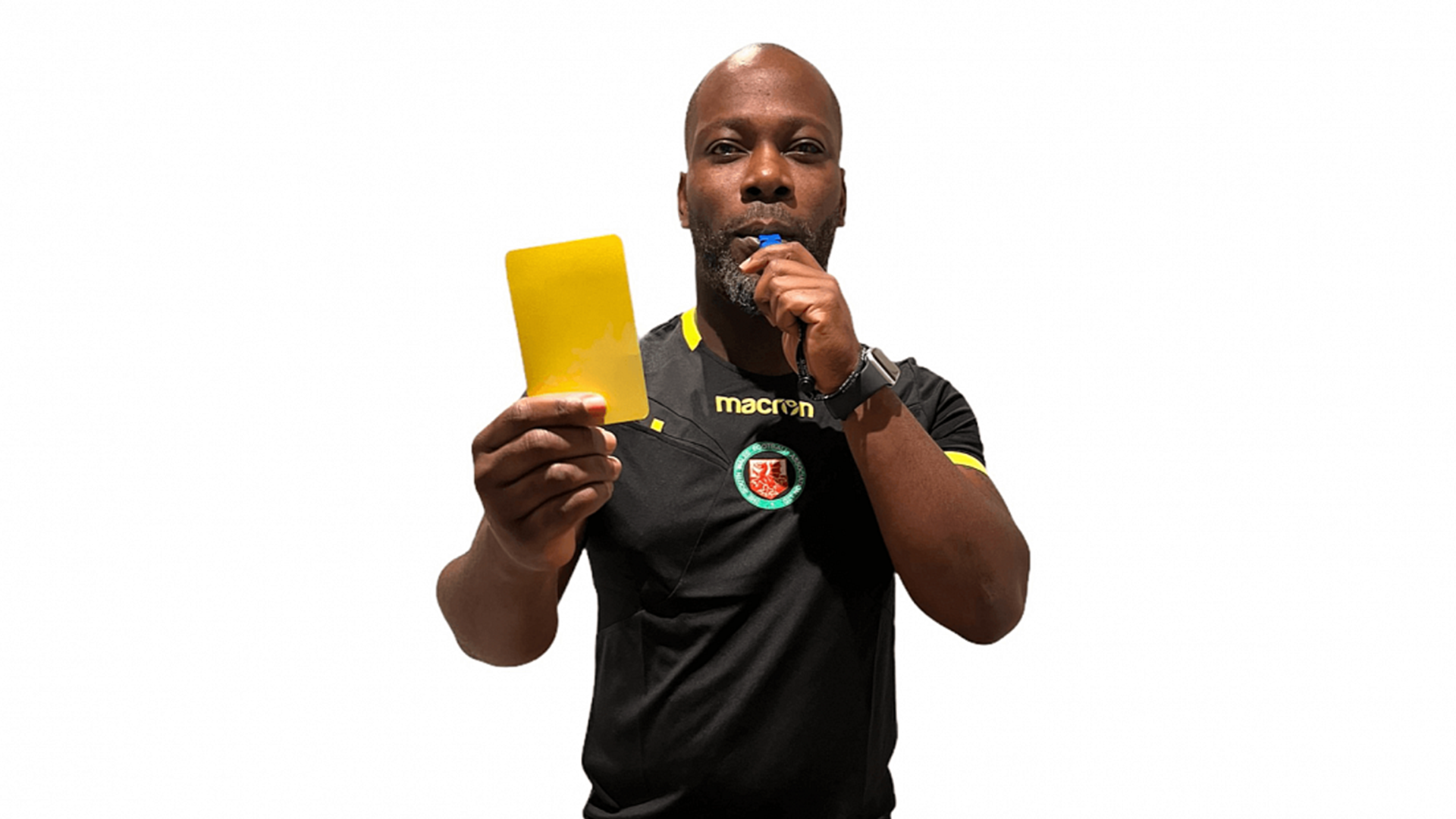 The prolific striker turned manager, best known for leading Caerau Ely to the Welsh League Division One title in 2015, claims completing the FAW Advanced Referees course has made him a better coach and is improving his players’ knowledge and understanding of the game.

Baah, who is currently manager of Treharris Athletic Western, in the Ardal South West, has started his refereeing journey, having completed the FAW online course and South Wales FA practical day, before taking charge of a string of games.

He said: “It’s helping me to be better on the sideline. I now understand the referee is there to keep the laws of the game flowing, so it’s made me a much better coach and I’m teaching the players how to speak to the referee better.

“I’m teaching them that they have to get the referee on their side and be respectful enough to that ref because that ref will have a chat with you when you make a mistake, rather than booking you straight away. It’s simple things, having good manners.

“We could learn a lot from rugby. Young rugby players are taught to respect the referee, not crowd them or have a go at them. Only the captain is allowed to speak to the ref and I think football needs to change.”

Having started his journey by refereeing the likes of the Barry Town academy and Cardiff City Ladies’ junior teams, the head of behaviour provision at Cardiff West Community High School is hoping to inspire others to follow in his footsteps and become active referees.

The Ghana born 40-year-old, who moved to the UK in 1992,  said: “There is a lack of ehtnic minorities and BAME representatives in the Welsh football system, even more so in terms of officials. I’m hoping I can help a new generation.

“If I could be a beacon for a lot of young people to look up to and emulate, we will hopefully have an influx of BAME kids and young teenagers who will take the mantle forwards.

“It would be massive because it’s important to have representation in everything. Step-by-step we can create a more multicultural football family.”

He is also passionate about the amount of female referees increasing in Wales, saying: “That culture of men ruling football needs to change too. I think, if we can encourage more females to come and watch the matches, they’ll enjoy it and want to get involved.

“Then becoming officials is just one role that they can play in the game.

“Also current players, both male and female, should consider becoming officials. It would help them to understand what they need to do to avoid getting a red, or yelloEven though he’s new to the officiating world, Baah has ambitions to progress as a referee.

He said: “I’m taking this as it comes. I’m really looking forward to it. The world’s my oyster. I’m still pretty fit, I’m still pretty young and I just want to see how far I go. It’s going to come to a point where I have to make a decision if I want to push on with my refereeing or stay in coaching. To be honest, I’m enjoying refereeing and I love coaching so it’s going to be a tough decision for me but, either way, I know I will always be involved. Whether it’s junior football, or Sunday league, I’ll always be involved. Now I’ve started and I’ve got that bug, I don’t think I’ll stop. I’ll just wait and see where I go and I have this thing about perfecting myself so if I find that I am doing well and want to move to another section, I’ll push on again and I just want to go as far as I can really.

And, he has a simple message for anybody thinking about doing the FAW course, saying: “Being a referee enables you to learn so much. You become a better person and you get to know so many different people. You can referee at different levels, you can pick and choose where you want to ref. It’s a great opportunity for people to go onto the bigger stage, if they start now and I can’t recommend that enough.”

If Nana Baah's story has inspired you, start your refereeing journey at: www.becomearef.wales