Black history month: The men who made history

To celebrate Black History Month, we're taking a closer look at some of the famous figures who have made history wearing the colours of Cymru. 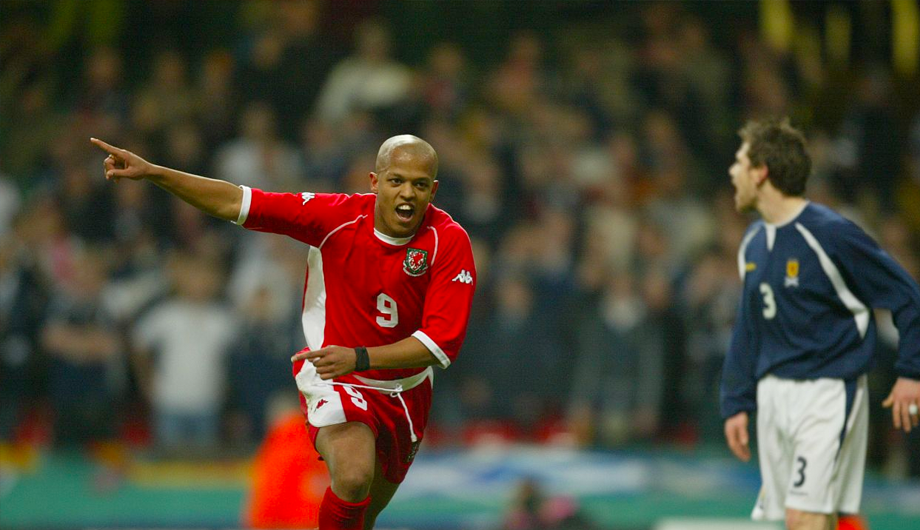 Having already covered the female trailblazers in the first part of this series, we now turn our attentions to the male players that have made significant contributions for their country, starting with the very first black player to pull on the Cymru shirt back in 1931.

A pioneer remembered long after his time. It was in December 1931 that John 'Eddie' Parris made his one and only international appearance for Cymru as his side suffered a 4-0 defeat in Belfast. Playing at the time for Bradford Park Avenue, the winger from the village of Pwllmeyric in Chepstow would become the first black player to represent Cymru in that match.

Parris was born in 1911, and played for Chepstow Town in his teenage years before joining Bradford Park Avenue, making his debut in 1929. He would later play for Bournemouth, Luton Town, Bath City, Northampton Town, Cheltenham Town and Gloucester City. He died in Gloucestershire in 1971 having become a factory worker at the end of his playing career.

What is notable about Parris's story is that his moment in history was lost for many years. When George Berry played for Cymru in the 1970's, he was widely-considered to be the first black player to wear the badge, as very little was documented about Parris. Newspaper reports at the time of his one and only appearance acknowledged his selection, but few made reference to his race.

But Parris's pioneering also extended to his club career, as he was also the first black player to play for Bournemouth when he joined the club in 1934, and went onto play over 100 games for the Cherries. He then became Luton Town's first black player, but his career was curtailed shortly after by the war.

No black player has scored more goals for Cymru than Robert Earnshaw. Currently joint-seventh in the all-time scoring charts, Earnshaw found the net 16 times in his 59 appearances for his country between 2002 and 2012. A hugely-popular figure with the Red Wall, Earnshaw also captained Cymru in a match against Scotland in 2011.

Earnshaw's international debut was particularly memorable as he scored the only goal of the game to earn Mark Hughes' side a 1-0 friendly win over Germany in Cardiff back in May 2002. In February 2004, he scored his one and only international hat-trick in a 4-0 win over Scotland.

Born in Zambia, Earnshaw moved to Caerphilly with his family in the early 1990's, came to prominence as he emerged through the ranks at Cardiff City. Making his senior debut for the club at the age of just 16, he would soon establish himself in the side, and scored 86 goals for the club before leaving for West Bromwich Albion in 2004.

Having played for a string of clubs including Norwich City, Nottingham Forest and Derby County, Earnshaw ended his career in Major League Soccer with the Vancouver Whitecaps. He is also the only player to score hat-tricks in the Premier League, the Championship, League 1, League 2, the FA Cup, the League Cup and for his country.

With 86 international appearances to his name, Ashley Williams has played more games for his country than any other black player. An inspirational captain and leader, Williams was the defensive rock that took Chris Coleman's side to the semi-finals of EURO 2016. Born in Wolverhampton, he qualifies for Cymru through his maternal grandfather who was from the Rhondda.

Williams made his international debut against Luxembourg in March 2008 under John Toshack, and scored the first of his two international goals against the same opponents in October 2010. It was in 2012 that Coleman made the key decision to make him captain, and the manager reaped the benefits of having such an influential leader on the field as success followed.

It was Williams who scored the crucial equalising goal against Belgium in the EURO 2016 quarter-final victory over Belgium in Lille. Cymru famously won the match 3-1, but were eliminated by eventual tournament winners Portugal in the semi-finals. Having started his senior football career with non-league Hednesford Town, it represented an incredible rise.

Williams also captained Swansea City for the majority of his Cymru career, while he has also played for Stockport County, Everton, Stoke City and Bristol City. Only Chris Gunter, Wayne Hennessey and Neville Southall have played more games for Cymru than Williams.