Black history month: The women who made history

To celebrate Black History Month, we're taking a closer look at some of the famous figures who have made history wearing the colours of Cymru. 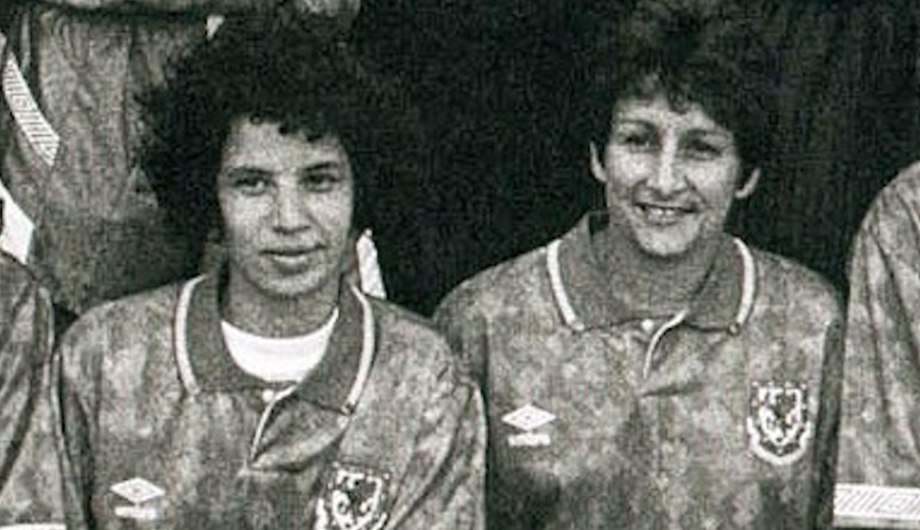 With Jayne Ludlow's side in UEFA Women's EURO qualifying, the first part of this series tells the respective stories of Vanessa O'Brien and Wendy Reilly, two trailblazers in the history of the women's international game in Wales. Women's football historian John Carrier recently caught-up with them both for this special feature.

It was Vanessa O'Brien who scored the first goal for Cymru when the team first came under the affiliation of the Football Association of Wales. Playing against Switzerland at Cwmbran Stadium in a UEFA qualifier in September 1993, O'Brien scored after 35 minutes, but could not prevent her side slipping to a narrow 3-2 defeat.

Born in Oldham, O'Brien played for Leasowe Pacific LFC after establishing her reputation as a consistent goalscorer at Manchester Belle Vue LFC in the North West Women's Regional Football League, and also played for the unofficial Manchester United Women's team before they formed a partnership with the club. Now living in Australia, football remains a huge part of O'Brien's life, as she explained to John Carrier.

“We migrated to Australia in 2005 and as soon as we arrived after a couple of weeks I got involved in coaching a junior girls’ football team at a club called Heathridge,” said O'Brien. “We had a very good team and some really talented young players. I realised I still loved playing the game and I was drawn to put my boots back on again and took on a role of player/coach for Sorrento Ladies as they were looking for a women’s coach. We had three successful seasons winning three league titles.

“I then formed a new women’s team at Wanneroo City, and after our first season we won the league, remaining undefeated. I was approached to go back to Heathridge, now called Joondalup City Football Club. They had a new women’s team and were looking for experience and guidance of coaching the players on and off the pitch. We had a great few seasons winning the league twice and reaching the cup final on two occasions.

“I was also involved in organising a talented Women’s Masters Team, Perth United, to play in Auckland, New Zealand in the World Masters Tournament in 2017. We had an abundance of talented players such as New Zealand international Kelly Jarden, and Donna Douglas, a legend of a player and a former team mate of mine from when we played together in the early 1990’s.

Born September 1962 in Birmingham, Reilly is remembered as a talented and committed midfielder and for her vocal encouragement by those who played alongside her. However, she remains modest of what she achieved representing her clubs and her country.

“You mean the legend,” said former team mate Claire O'Sullivan to John Carrier. “She inspired me and many others to be the best we could be.” Reilly's football career started at Newport Nightingales as a 13-year old in 1975. From there she joined Llanederyn Ladies in 1980, who would later become Cardiff Ladies.

“They were great times back then,” said Reilly. “I was part of a good team that also competed in 5-a-side competitions.”

Reilly was named in the Cymru squad that went to France for Sylvia Gore's first game as manager of the national team in February 1979, although she did not play. Her debut came two months later away to Scotland in Dundee in a 2-0 defeat. She also played in Italy with Cymru against Sweden and Netherlands in the unofficial European Cup. In total, Reilly played for her country 34 times, and in 1996 she was appointed captain in an away game against the Faroe Islands.

Cymru won 1-0, but during that game Reilly suffered a head injury. “I had a lump the size of an egg on my head but I wouldn't come off,” she recalled, although she was eventually taken off by manager Roy Thomas and coach Glan Letheren for treatment. Not long after that she retired from international football, but was brought back into the team almost a year later, playing with great effect and inspiring others. Having taken up coaching, Reilly then spent a season as the national team coach when Thomas stepped down and Letheren took over the hot seat.